Born and raised in St. Martinville, in southwest Louisiana, Marcelle Bienvenu grew up “where good cooking was almost as large an article of faith as the Catholic religion.” As a child her daily life was filled with good food… like “freshly baked sweet potatoes slathered with homemade butter and drizzled with locally-made pure cane syrup”, dark and deliciously thick gumbos made with whatever was in season (from chicken and sausage to freshly-caught seafood from the local waters… to the occasional rabbit or wild duck). She also savored “spicy jambalaya that often contained shrimp, smoked sausage and chunks of tomatoes.”

Professionally, Marcelle started out as a writer. A food writer, to be exact. She wrote for the Times-Picayune of New Orleans and also served as a researcher and consultant to Time-Life Books, contributing to many projects including Foods of the World, American Cooking: Creole and Acadian, and The American Wilderness: The Bayous. Marcelle has also worked with many publications such as Food & Wine, Southern Living, Redbook, The New York Times, Saveur, and a host of local publications.

She may be most well-known locally for a little book she published in 1991 called Who’s Your Mama, Are You Catholic, and Can You Make a Roux? A sequel to that book followed in 1998.

From 1992 to 2005, Marcelle worked on many special projects with Emeril Lagasse, including several cookbooks like Louisiana Real & Rustic, Emeril’s Creole Christmas, Emeril’s TV Dinners, and Every Day’s a Party. She also contributed to the following Emeril cookbooks: Emeril Primetime, From Emeril’s Kitchens, Emeril’s Potluck, and Emeril’s Delmonico: A Restaurant with a Past.

In 2002, Marcelle co-authored Eula Mae’s Cajun Kitchen with Eula Mae Dore. She also co-authored Stir the Pot: The True Story of Cajun Cuisine with Carl Brasseaux and Ryan Brasseaux in 2005. And she is also the author of Cajun Cooking for Beginners and, more recently, No Baloney on My Boat!

In addition to writing about food, Marcelle has had quite a career as a chef. Her professional cooking started in the 1970s when she was hired to work at Commander’s Palace in New Orleans. While there Ella Brennan took Marcelle under her wing and taught her the ins and outs of the restaurant business. From 1981 to 1984 she owned and operated her own restaurant in Lafayette, LA called Chez Marcelle.

Marcelle Bienvenu is one of my early culinary mentors. As I say on the radio show below, I brought one of her cookbooks (Who’s Your Mama, Are You Catholic, and Can You Make a Roux?) into marriage almost 15 years ago. My wife brought another of Marcelle’s books into our marriage: Louisiana Real & Rustic. Both cookbooks are excellent, and Marcelle is always an absolute delight. She is truly a classy southern lady. Listen to our conversation below.

You can also download the MP3 file of the radio show by clicking here, or you can find it on iTunes.

On the show we talked with Marcelle about fishing and all the fresh Gulf shrimp and crabs that are available during the summer months. Boiled shrimp and crabs are a delightful summer pleasure in south Louisiana, and we talked about some of the different ways you can prepare shrimp and crabs. We also talked corn, eggplant, okra, Creole tomatoes, blueberries, strawberries and all the summer treasures you can find at the local famers market. And, unfortunately, we lamented the quality of this year’s crop of Creole tomatoes. What happened to them? We don’t know. It’s a mystery!

Listen to the show above to hear Marcelle’s tips on cooking fresh corn, zucchini, and tomatoes. She has some fabulous recipes (including a lime, salt, black pepper & butter sauce for roasted corn)!

In addition to the fresh Gulf shrimp and crabs that we talked about on the show, we also talked about scoring fresh fruits and veggies at the local markets. One of the things that Marcelle mentioned was blueberries, which reminded me of what my wife made for me on my birthday and Father’s Day… Blueberry Cobbler. We topped that cobbler with a brand new cream cheese ice cream that is available locally at the Covington Farm Market. And the name of the new ice cream? Wait for it… Flippin’ Amazing.

And guess what. It is. It really is flippin’ amazing.

We highly recommend it!

Check it out on Facebook: Flippin’ Amazing Ice Cream. 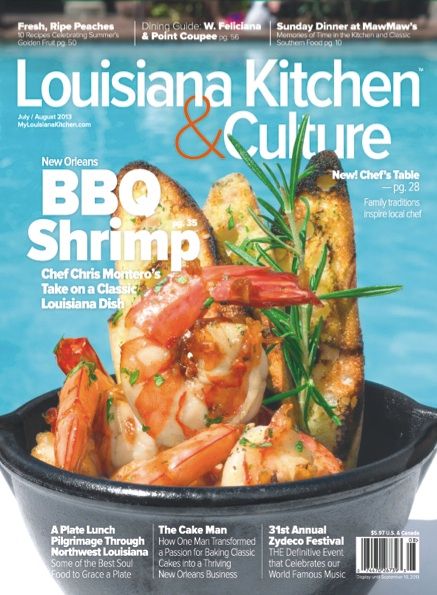 Susan Ford, publisher of Louisiana Kitchen & Culture Magazine, joins us again to talk about the upcoming issue (which is now available locally, nationally, and via subscription).

Susan told us about a new section in the magazine that debuts in the July/August issue called Chef’s Table, which gives readers an insight into the personal life and families of local chefs. The first chef highlighted is Chef Chris Montero, the executive chef of Cafe B in Metairie and Cafe NOMA in New Orleans.

The latest issue also features the famous plate lunches available throughout the northern part of Louisiana.

Listen to the show to get the scoop straight from Susan Ford, publisher of Louisiana Kitchen & Culture Magazine!

Around The Table Food Show

Around The Table Food Show debuted on Friday, April 12, 2013 in New Orleans and Baton Rouge on Catholic Community Radio (690 AM in NOLA and 1380AM in BR). It is also available for listening online.

Around The Table Food Show highlights the local culture and cuisine of south Louisiana. The show is hosted by Dave Dawson and myself. Dave Dawson is the president of Catholic Community Radio, which has stations in both Baton Rouge and New Orleans.

The show airs on Fridays at 3:10 PM Central (just after the Divine Mercy Chaplet) in Baton Rouge and New Orleans. The listening area spans from the Mississippi/Alabama border all the way to the west of Baton Rouge on the way to Lafayette.

Each broadcast is recorded, archived, and released as a podcast. You can subscribe to the podcast on iTunes. The first two broadcasts are embedded below. You can listen to them in your browser or download them as MP3 files. In just a few days, I will also launch a website for the show at AroundTheTableRadio.com.

Register between now and October 1st and receive $50.00 off, plus get a free copy of Jeff’s collection of Middle Eastern recipes!

Join us as we PRAY and BREAK BREAD together in Israel

We will not only WALK WHERE JESUS WALKED, and PRAY WHERE JESUS PRAYED, but EAT WHAT JESUS ATE!

Price of $3,795.00 includes airfare from Atlanta, Philadelphia, or Newark.

Details and registration form are at /holyland